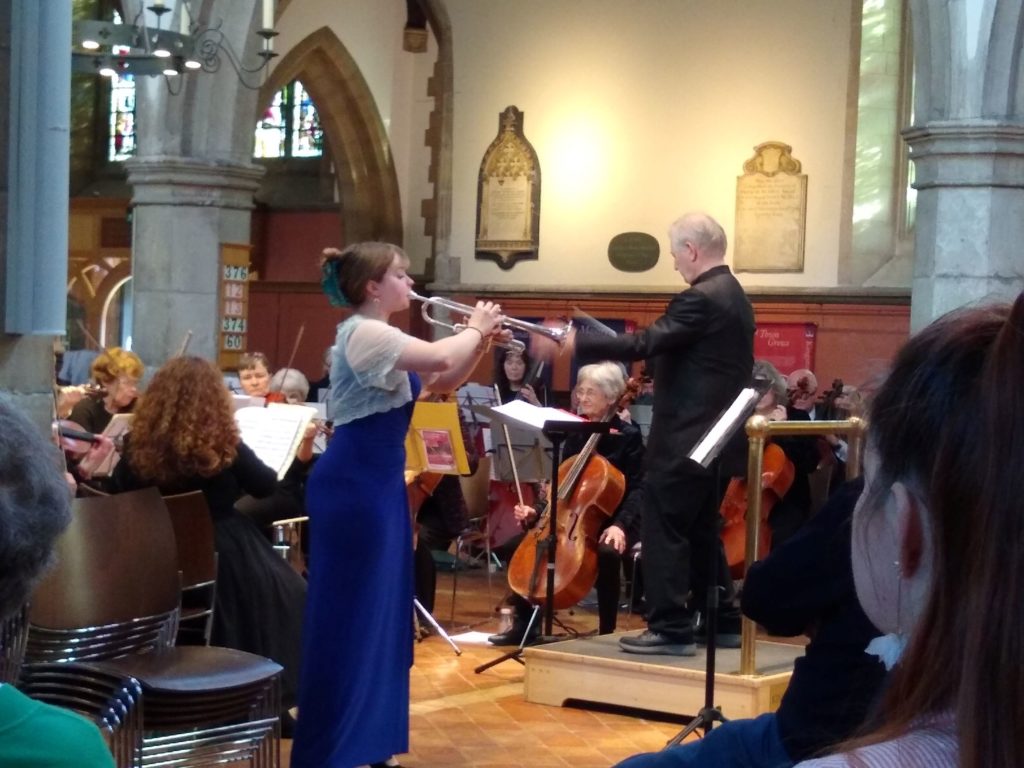 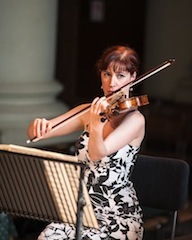 The orchestra was fortunate to have Maddy as leader from 2014 the end of 2018 when she moved back to Australia. She played with us as a soloist on three occasions: 2015 – Beethoven: Violin Concerto in D, 2016 – Brahms: Violin Concerto in D major, 2018 – Vaughan Williams: The Lark Ascending.

Australian violinist Madeleine Easton is an established star on the international stage, known for her versatility and expertise in both period and modern styles of playing. Having studied at the Sydney Conservatorium and won many prizes, followed by postgraduate study at the Royal College of Music, she has since performed at the highest level in Europe and Australia with orchestras such as London Philharmonic Orchestra, the City of Birmingham Symphony, Orchestra of the Age of Enlightenment, the Academy of Ancient Music, and the Orchestre Révolutionnaire et Romantique.

Madeleine is forging a career as a director and concert master. She has performed as both guest and permanent concertmaster of several leading orchestras in the UK and abroad. Engagements in this role include the Orquestra Sinfonica de Madrid, the Gulbenkian Foundation Orchestra of Lisbon, The English Baroque Soloists under Sir John Eliot Gardiner, the Australian Brandenburg Orchestra, The Kings Consort, The Gabrieli Consort, the Musicians of the Globe, The Independent Opera Company, London Orchestra da Camera, Orchestra Nova, the Guildford Philharmonic, Bath Philharmonia, Southern Sinfonia, Florilegium, the Melbourne Symphony Orchestra and the Northern Ballet Orchestra of England. She was appointed concertmaster of The Hanover Band in 2006 and continues to perform with them as both leader, director and soloist.

Madeleine has performed on many award winning recordings including the Bach Cantata series with the Monteverdi Choir and English Baroque Soloists, the recently released Bach B minor Mass recording with the same ensemble, Haydn’s ‘Creation’, Mendelssohn’s Elijah and Mozart’s C Minor Mass with the Gabrieli Consort to name a few. She has released the complete piano trios of Alexis de Castillon with her piano trio ‘Trio Castillon’, available on Peyrole Records. She has also recorded the Antoine Reicha Bassoon Quintet and variations with the all Australian ensemble, ‘Island’ available on the ARS label.

Madeleine is proud to be part of the internationally acclaimed Australian World Orchestra. She is also the artistic director of Australia’s newest dedicated Bach ensemble, ‘Bach Akademie Australia’ which she founded in 2017 with the support of Sir John Eliot Gardiner. 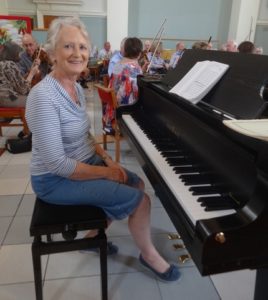 Anthea Fry, who has played the piano from the age of three, is able to trace her pedagogical roots back to Clara Wieck, wife of Robert Schumann. She was a prizewinning student at the Royal Academy of Music in London under the guidance of Robin Wood and Max Pirani and has performed throughout the UK, in USA and Europe, with appearances at the Wigmore Hall, Queen Elizabeth Hall and Purcell Room.

She has made a special study of the piano works of Robert Schumann and these are often a feature of her solo recitals. Programmes are diverse, encompassing Bach, Beethoven, Schubert, and Chopin through to Debussy, Ravel, Hindemith and Stravinsky.

She performs widely as a chamber musician with the Lauriston trio, which has recently expanded into the Lauriston Ensemble. She also tours the world as a music examiner. 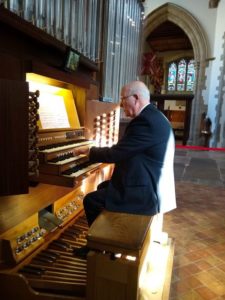 Peter Bullett is a member of the orchestra in which he plays cello.  He was a choral scholar at the Temple Church, gaining professional qualifications in piano and organ while still at school, before pursuing a career in physics and technology education. 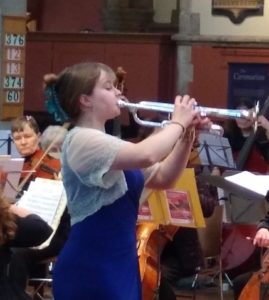 Born into a musical family, Clara Falkowska began studying the violin with her father at the age of five and had her Grade 8 by the age of ten.  She now holds ABRSM diplomas in Performance on both violin and trumpet, and she is also a very keen singer.  She has played in the National Youth Orchestra for three years on both violin and trumpet, including playing 1st trumpet at the BBC Proms.   She will play with the National Youth Music Theatre in summer 2019.

As a music scholar at Westminster School she has played numerous solos in Westminster Abbey.  She has recently won a scholarship for undergraduate study at the Royal Academy of Music.  She was a Junior Exhibitioner at the Guildhall School of Music and Drama and learns the trumpet with Andrew Mitchell and natural trumpet with Paul Sharp.

She played Haydn’s Trumpet Concerto in E flat major with the orchestra in March 2019. 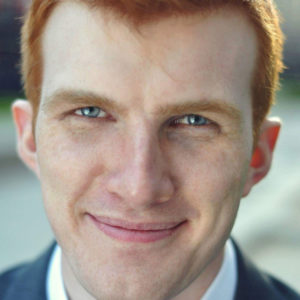 James Quilligan graduated from the Guildhall School of Music and Drama in 2015 and for the past year has been a lay clerk at St John’s College, Cambridge. He continues to study privately with Robert Dean.

James returned to sing with the orchestra in Vaughan Williams’ Fantasia on Christmas Carols in December 2018. 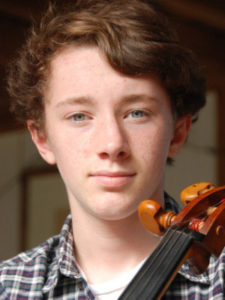 Born in to a family of professional musicians Felix has always been surrounded by music and began learning the cello aged 5. At the age of 11 Felix gained scholarships to both the Junior Royal Academy and Wells Cathedral School. Felix spent 7 years as a specialist cellist studying with Penny Driver at Wells. In 2016 Felix gained a scholarship to the Guildhall to study with Ursula Smith.

During his first and second year of Guildhall, Felix performed on many platforms with analytical feedback from professors. Felix has won many prizes; a finalist in the Two Moors competition twice, Newbury Young Musician of the Year 2014, and won numerous accolades of “outstanding” in the Mid Somerset festival in 2014 and 2015. Felix took part in regular master classes with professors such as Leonid Gorokhov, David Strange, Thomas Demenga, Robert Cohen over his time at Wells, all of which were thoroughly immersive and inspiring. Felix also enjoys playing in his quartet and recently took part in the Akoesticum Talent Programme 2018, in Holland.

Felix played Tchaikovsky’s Variations on a Rococo theme with the orchestra in June 2018. 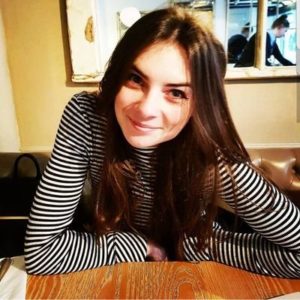 Bryony Prior began studying Horn at age 8. In 2010 she was selected to play in the orchestra of Glyndebourne’s community opera, Knight Crew which was documented by the BBC and in the same year Bryony was the youngest musician in the final of the West Sussex Young Musician Award.

While studying at Junior School of Guildhall School of Music & Drama, she was appointed Principal Horn in the Symphony Orchestra and participated in master classes taken by Rex Richardson and Tine Thing Helseth.

Bryony gained a scholarship at Guildhall School Of Music And Drama, studied with Richard Bissil and was also coached by David Pyatt, Jeff Bryant and Hugh Seenan. She studied Jazz singing with Lee Gibson. Her orchestral experience has led to invitations to play with Kent Sinfonia, Bayleaf Brass, London Schools Symphony Orchestra, Docklands Sinfonia, Folkestone Symphony, Adhoc Orchestra’s made up of LPO musicians and many more.

Bryony also performed as concerto soloist with The Brandenburg Sinfonia and the Southwark Sinfonietta. During her time in London she has been a member of Dockland’s Sinfonia, played at Angel Studios for Katie Meluas Album/ Single ‘I will be there’ and as a jazz singer has performed at Arundel Jailhouse Jazz Club and with big bands. Bryony recently appeared as a singer in a BBC short video about the recording of a virtual choir of Cystic Fibrosis sufferers. Sales of the CD, Choirs With Purpose released shortly before Christmas, put it in the top 40 and helped raise much needed funds for the CF trust.

Bryony also performs in her own duo with renowned musician/trumpeter, Paul Newton. Their repertoire covers everything from Jazz to modern, pop and classical.

Bryony played Mozart’s Horn Concerto No 3 with the orchestra in March 2018. 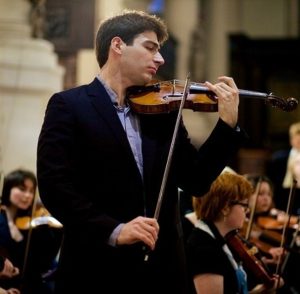 Pierre played the Introduction and Rondo Capriccioso by Saint-Saens with the orchestra in April 2017. 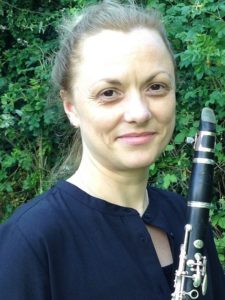 Helen Pierce, after graduating from Goldsmith’s University, studied under Keith Puddy and Nick Bucknall at Trinity College of Music for a Master’s Degree, which she passed with distinction. In 2001 she was awarded the Wilfred Hambleton prize for clarinet, and went on to study with Roland Diry in Germany and with Hans Deinzer in Italy.

Helen plays with the quartet Clariphonics who were semi-finalists in the Royal Overseas League competition, 2008 and were selected as Park Lane Group young artists in 2009. Helen also plays in the Argento Trio who appear in venues throughout the UK and has performed with the Berkeley Ensemble in their project of Arnold’s chamber opera The Open Window.

Solo engagements in 2016 include Strauss’ Duet Concertino for Clarinet and Bassoon performed with St Paul’s Sinfonia and Weber’s Concertino in Eb Major, Op26 in our summer concert. 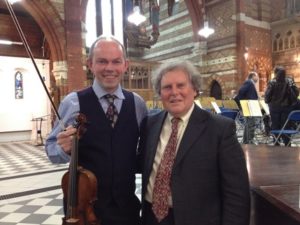 Peter Nall has been playing the violin since the age of 7 and plays with the London Philharmonic Orchestra with whom he has appeared with world famous conductors and musicians. He also offers advice to professional and amateur string players in locating and purchasing fine instruments.

He has appeared twice as a soloist with Kingston Third Age Orchestra: he played Bach’s Concerto for Two Violins in D minor (with the leader John Kitchen) at the orchestra’s inaugural concert in 2010, and came back in 2014 to play Mendelssohn’s Violin Concerto in E minor Op. 64.

Belén Barnus (soprano), Emily Kyte (mezzo soprano), Jorge Navarro-Colorado (tenor) and James Quilligan (bass), all students at or recent graduates of the Guildhall School of Music and Drama, were the soloists in the orchestra’s performance in May 2013 of Haydn’s Mass in Bb major, Hob.XX:14 – Harmoniemesse.